In the summer of 1846 Mary Wright Victor was born in the small Cornish fishing village of Mousehole. She was the second child and oldest daughter of fisherman Bernard Victor and his wife Alice nee Rowe. 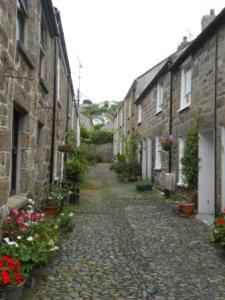 In September 1867, when she was 21, she married a Newlyn man five years her senior called Edward Albert Kelynack in St Peter’s Church, Newlyn.  Edward was the son of a fisherman but was himself a carpenter; he turned out to be a very good one. He had joined the Royal Navy and by the time he was 20 in 1861 was away serving on the Algiers, a 91-gun ship under the command of George O’Callaghan. It looks like the Algiers was in Corfu although the census reads what looks like ‘Corfu Road’.

Their first child, Mary, was born in 1869 in Devonport [Plymouth] but their second child, son Edward, was born in spring 1870 back in Newlyn so perhaps father Edward was away at sea.

In April 1871 Edward was away at sea in the East Indies, this time working as a Carpenter 2nd Class on the Dryad sloop. The Dryad is reported to have caught five slave dhows in 1869 and was in the East Indies in 1870. The ship is recorded as being in Devonport in 1879,

In 1871 Mary’s unmarried Aunt Grace was staying with her in the Street-An-Nowan area of Newlyn, perhaps for company and support for Mary as a new mum. I’d be interested to know if Edward had been home for the 8 years in-between 1871 and 1879, otherwise it sounds like a really long posting, no wonder she wanted a companion.

The 1881 census also finds him overseas, this time in Gibraltar on the iron-clad ship the Agincourt, Channel Squadron, as a carpenter. Mary was living with her two children in Devonport; they were living at 7 Martin Terrace which I think would be in this area shown on this c1892 National Library of Scotland map.  Again I find Aunt Grace staying with her, marked as a visitor, so hopefully Grace and Mary were close and got on well.

Edward must have been home in 1882 as their third and final child Lorina was born in summer 1883.

In April 1888 her 19-year-old older daughter Mary married an army schoolmaster called John Frederick Pearce in St James Parish Church, Devonport.  Their son Harold was born the following year. By November 1890 John had been posted to Scotland: South Leith (by Edinburgh), at Pirshill Barracks, ‘Jock’s Lodge’, again as an Army Schoolmaster. Their daughter Beatrice Sylvia was born on the morning of 18 November and registered on 1 December in South Leith by her father; he had also been present at their daughter’s birth. I suspect they may have used her middle name and known her as Sylvia as that’s how she’s listed in 1891 on the census at the barracks. Sylvia (as she was referred to in 1891 census) wasn’t baptised up in Leith, she was baptised in 1892 back in Devonport.

In 1891 Edward is again away at sea, and this time Mary, still down in Devonport, proudly describes him as Chief Carpenter, Royal Navy. Their son Edward was working locally as a newspaper reporter.

In June 1893 Edward Snr was serving on the flagship of the Channel Squadron: the Camperdown [boat spec here].  They were near Tripoli in the Lebanon but “Following an order by the admiral to carry out a dangerous and near impossible manoeuvre, taking into account the positions of the vessels” according to this ship index web page, it collided with HMS Victoria during manoeuvres which then sank with the loss of 358 men [see painting of the collision here]. No doubt Edward was extremely busy doing emergency repairs as the ship limped into port.

This was one of many experiences he had while Mary was home in Devon; others included a long spell in Vancouver and time on the east African coast, notably Natal “where he was favoured, at Natal, with the friendship of the late Bishop Colenso” [reported in The Cornishman].

At some point in the 1890s daughter Mary became ill; she died in early 1901 back in Devonport.

By March 1901 Edward had retired as Chief Carpenter and he was home in Devonport with Mary Snr, Edward and Lorina, still in Martin Terrace.  By then their son Edward was working as a political registration agent. The household also included their grand-daughter Beatrice.  I’d feared her brother may have died as he was not listed but I tracked him down in Rathmines, Dublin, where he was living with his father.

The following year widowed son-in-law John remarried back in Plymouth, his bride was Emma Cockram, another Devonport-born woman.

His obituary in the Cornishman newspaper refers to a fascinating career:

“Death of Mr E. A. Kelynack, of Plymouth.

On Saturday, less than a week after his brother’s decease, Mr. E. A. Kelynack died at his residence, at Trelawny Road, Plymouth.  Deceased was sixty-three years of age.  He had served a long period in the Royal Navy as carpenter, attaining to the rank of chief carpenter, and retiring with the rank of hon. Lieutenant.

Mr. Kelynack had seen a good deal of this world as a naval man.  He served commissions on the East African coast, where he was favoured, at Natal, with the friendship of the late Bishop Colenso.  He was in charge of the shipwright department of Vancouver dockyard for several years.  He had also served on the Northumberland in the Channel squadron, and was on the Camperdown in the fatal collision with the Victoria.  Mr. Kelynack was a very genial man, and had a large number of friends at Devonport, Plymouth, and Newlyn.  In politics he was a Conservative, and was an active worker for the cause in Devonport.  He leaves a widow, one son and daughter, unmarried,  Within recent years his eldest daughter, married, died after a long illness.  Mrs. Kelynack the widow, is from Mousehole, and was a Miss Victor before her marriage.’”

Mary had further sadness when her aunt and long-time companion Grace died in late 1905, still in Devonport.

In 1906 Edward married Eva Cheyne nee Beachey; by 1911 the were living in Paignton, Devon.

In April 1911 Mary was living alone in Plymouth and described herself as ‘housekeeper, formerly’.

I can’t find Lorina in the 1911 census; the only info I have about her after 1901 is from a news story in the Western Morning News in 1934 (via the British Newspaper Archive) which reported that she was trying to sort out an insurance policy for a man called Alfred Beckett with whom she’d been living as his wife in St Just-in-Roseland, near Truro in Cornwall.

I don’t know where Mary ended her days, but I found a reference to the death of a Mary Kelynack in 1834, in The Cornishman.