I’m not an academic, but I work at the University of Stirling, but I just really get on with being a secretary, my day job; exploring my family’s history is one of my hobbies.

So I was minding my own business, scrolling through my emails the other day, when a blog post from our Information Services feed caught my attention.  A new set of historical newspapers added to the collections available. We subscribe to historical newspapers?! This was something I’d not come across in my day-to-day work in a different School. I probably was the most excited person in the entire University about this (sadly enough!) and this weekend I have been playing with it.  And this is what I’ve found. 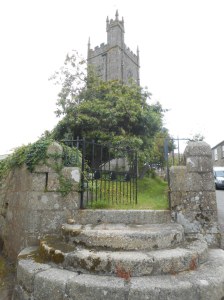 I recently blogged about my 4G Aunty Alice Rowe from Newlyn, Cornwall, who married a fisherman called Bernard Victor (1818-1890) from neighbouring Mousehole. She moved there and just got on with the business of having a family, in their case eight children, and being a fisherman’s wife.

What I find so frustrating about family history is that when you’re writing about people born 150 years ago or more, you so seldom get an idea of what makes them tick, what their passions are, what makes them mad.

Well I was searching on the University’s subscribed newspaper collections for Edwin Victor, one of Alice and Bernard’s sons, and I wasn’t coming up with anything. So I broadened my search terms and references to Victor and Mousehole came up. Yes! While I was still drawing a blank for Edwin, there was Bernard mentioned in a few articles all relating to Dolly Pentreath, famous for being the last person who spoke in Cornish, who didn’t learn English until she was 20 years old. Dolly died in 1777 and had a memorial built in her memory many decades later, partly funded by Prince Louise Bonaparte. [I’ve actually heard it suggested that she wasn’t actually the last person to do this but the 2nd last – she just had better PR!]

Turns out that Bernard’s grandfather George Badcock was the Mousehole undertaker, and Bernard recalled to the Cornishman newspaper George telling him:

“The following is an incident which took place at the funeral of the above celebrated dame [Dolly Pentreath]. The undertaker was Georgie Badcock, a grandfather of Mr Bernard Victor of Mousehole.  There were eight chosen fisherman bearers to take her to her last resting place.  Those were frisky and whiskey days; Mousehole men loved their drop then.  They had taken the coffin up as far as the Watering Lane on the way to Paul, and there made a halt protesting that they would not budge another inch without, in local parlance “wetting the other eye”. In order not to obstruct the traffic, the coffin was taken into the Watering Lane, and deposited there, and one of the bearers were deputed, all of them at first declining the honour, to fetch the necessary drop (a bottle of gin). This was duly brought, drunk, and discussed. The coffin, with its remains, was then picked up again and marched off to Paul with every solemnity.”

Bernard was obviously keen on the language, and contributed several words to the Cornishman in 1879-80 when the paper was doing a push to collect Cornish words before they were lost.

So now I have this image of Bernard passionately writing to the local newspaper about local history, of wandering round Mousehole talking to the village elders and asking for Cornish words and expressions [in another Cornishman article it mentions a long list of names he identified].

What I don’t know is what Alice thought of this, whether she was passionate about it too supporting him with this, or indulgent as it kept him out of trouble!

Either way, when the monument was erected in the wall of Paul Cemetery in 1860 I hope that Bernard was present to see it.