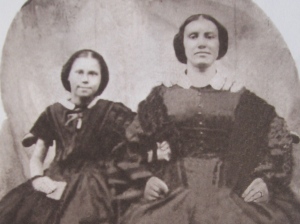 My great-great-grandmother Martha Waddington was another Yorkshirewoman.  One of ten children, she was born in Baildon Green & baptised in February 1827 in Guisely St Oswald Church in Yorkshire.

Martha married William Broadbent, a coal miner, in Birstall St Peter when she was 20 and together they had 8 children; I’ve previously written about their eldest daughter Rhona.  Rhona was an inspiration for me when getting back into genealogy, see Rhoda – a smile from history, and I discovered she hadn’t had the young death we’d initially feared, see What Rhoda did next .  I’m descended through Martha & William’s sixth child Ernest Broadbent, born 1860.

By 1871 she and William were living in Leeds where he was working as an iron stone miner; by 1881 he was still a miner, but by 1884 he had become a grocer, based on Freehold Street.  A year after that, when William died, she took over the running of the shop.

Although illiterate when she married William back in 1847, by 1887 she had taught herself to write, or at least to sign her name, for when she re-married in 1887 she wrote her own name in the register. And again on the register I saw Rhona’s signature – obviously a very close mother and daughter.

Her new husband had a unique name – such a gift after trying to tease out the threads of the Broadbent families – Pybus Allison.  He too had been married previously and widowed; he too was a store-keeper retired before he and Martha married.

Pybus, as well as having an unusual name, had an usual profession, being an omnibus and milk & groceries proprietor.  In 1870 he was tried for manslaughter but acquitted unanimously when a woman died after a wheel came off his omnibus.

Pybus set up an irrevocable will which did not include Martha’s descendents.  Later they tried unsuccessfully to revoke this so that her children from her first marriage may benefit. She only outlived him by two years and died in 1908; I hope her family took care of her financially in her last years.

Next I’d like to find out about Martha’s parents – they’ve not been as easy to track down as some of the other sides of the family, so if you’re a cousin of mine, I’d love to hear from you!