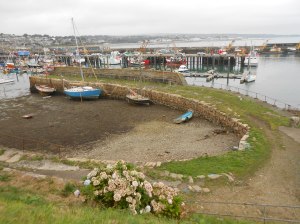 William, baptised on 4 August 1819, was the fifth of Peter and Catherine Jaco’s eight children and, like his father and his two elder brothers, would make his living on the sea.

They grew up in the fishing community of Street-An-Nowan, Newlyn, in early 19th century Cornwall.  By the time he was born, eldest brother Peter was 12, and all would have spent their youth around the harbour, playing on the sand and swimming, then later helping the older boys and men by bringing the catch from the ships to the shore.  When William was 6 his brother Peter joined the Merchant Navy, and by the time William was 16 his brother Benjamin was Mate on a schooner.  His eldest sister Jane married a miner and moved away when William was 15, Peter married in April 1838 and William, aged 19, was witness at his wedding in Paul Parish Church.

The first census William was recorded on was the 1841 one, when he was 21 and living at home with his parents in the Fradgan [street area] within Street-An-Nowan.  His sister Honor married when he was 23, but she stayed locally, also living in the Fradgan.

In March 1848, when William was 28, he married local girl Grace Cotton and she must have been blooming as they had their first son William 4-5 months later, who was baptised that autumn, again in Paul Parish Church.  Grace was the daughter of fisherman Charles Cotton and Deborah Pendar, but Deborah must have been widowed when Grace was still young because at the age of 5 Grace was admitted to Penzance Dispensary and noted as a widow’s child.  When Grace met William she had been working as a servant.

Their second son was born two years later and named John Cotton Jacca.  Unlike his elder brother he was baptised a Methodist, at the Wesleyan Methodist Chapel just at the top of the road.

At the time of the 1851 census it appears William was away fishing on the Abner and Grace and baby William at home had her mother Deborah living with them.  I don’t know why baby John Cotton wasn’t recorded; maybe he was asleep in a crib and they forgot about him!

The year after that their next known child was a daughter: Mary.  Mary was born by late summer 1854 and was and was baptised on 8 November of that year, this time in the new Newlyn St Peter church just along the Coombe river in Street-An-Nowan. Perhaps Mary was a sickly baby, for she had died by the time she was 4 months old and was buried on 17 November 1854 in the new grounds up at Paul Cemetery.

In 1856 William and Grace had a second daughter, whom they also called Mary.  Mary wasn’t baptised until she was 2 years old in 1858, again in Newlyn St Peter’s parish church.

William and Grace’s children were possibly the first generation to go to school during the week, although attending school wasn’t obligatory until the 1870 Education Act.  However prior to 1854 when a Wesleyan Day School was built in Newlyn, children attending school had to head up the hill to Paul Churchtown where a school had stood on the Green across from the church since 1825.  That National School at Paul was the one pictured in Elizabeth Forbes’ painting School Is Out which was completed in 1889.   [Incidentally a lady called Mrs Enid Hall who lived across from my Granny in Newlyn always proudly told us the boy crying in the photo was her father, although I have seen that same model claimed by other Newlyn familes!]

In May 1860 Grace’s mother Deborah died and was buried in Paul parish.

By the April 1861 census the family had moved house within Street-An-Nowan and were living on Foundry Lane, where they stayed for several years, and where they were living when their son Richard was born; he was baptised in April 1865 in St Peter’s Church. Richard was deaf from childhood, and was to live with his parents and work as a tailor.

The 1871 census found the family living in Strick’s Court, which I believe was near the Wesleyan Methodist Chapel in Street-An-Nowan.  In 1876 the first of their children to marry, John Cotton Jacka, married fisherman’s daughter Elizabeth Strick but I think the name was just coincidence.  John and Elizabeth had their first child, Mary Jane Jaco, in 1877 and Elsie in February 1882, followed eventually by John (1884), Grace (1890) and William (1892).

Their daughters and grand-daughters went into shop-work.  John, the elder of their two sons, decided to make his fortunate in the USA.  He emigrated to the US on 3 June 1914 on the White Star Line’s Oceanic after booking via a Penzance agent called Messrs Ludlow and Sons. 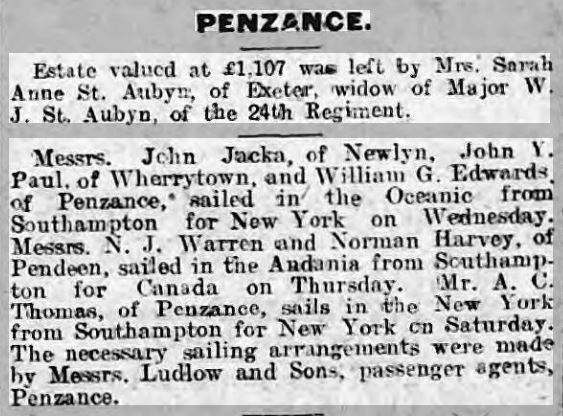 The Cornishman’s Cornish Folk in New York: Letter from Sid Blake feature reports names of those passing though Blake’s Cornish Arms Hotel which was found at 443 West 23rd Street.  On 25 June his column reported “John Jacka, from Newlyn, to Detroit’ had stayed there.  However John ended up in Akron, Summit County, Ohio, USA, where his dream came to an end when he caught Spanish Flu and died on 30 October 1918; he was buried in Glendale Cemetery and his headstone is pictured on Find-A-Grave.  I can’t identify the story of youngest child William who perhaps also emigrated or died in infancy.

By 1881 William and Grace were living in Orchard Place [where my own family lived many decades later] with William, Mary and Richard still at home with them.

Their net-maker daughter Mary Jacka married in 1882; her husband was fisherman William Batten.

William Jnr [William and Grace’s son] married Lavinia Hall in late 1883. Lavinia’s parents, farmer/ agricultural labourer William and Ann Hall, had lived close to Land’s End in St Leven and Sennen parishes and she was the third daughter in large family.  Her story was a bit confusing at first, but after following all the census records through the decades the truth emerged.

In the 1871 census 30-year-old Lavinia had a 7-year-old brother listed called Frederick, although ‘their father’ was 70 and widowed; this was a pretence continued in the 1881 census despite William Hall’s death in the years between.  In the 1891 census, with Frederick listed as head of the family, he refers to Lavinia as his mother and William Jaco as his step-father.  Also in that 1891 census Lavinia had shaved some years off her age, appearing only 6 rather than the actual 12 years older than her husband.

Frederick had married Mary and was working as a cabinet maker although later he became a trader of glass and china.  He moved by 1911 to Torpoint, which is just the Cornish side of the Tamar, across from Plymouth in Devon.  There he continued as a dealer with his wife and two of his daughters assisting in the business. By that time Frederick and Mary had had nine children, of whom 6 were still alive.  Perhaps a clue to his mystery father was the fact that Frederick called his son Phillip Scadden Hall – there were many Scaddens in West Penwith.  The other five surviving children were all girls: Ethel, Lillian, Florence, Violet and Marion.

In 1891 William was living with his daughter Mary and son-in-law William Batten.  William’s youngest (deaf) child Richard, who was working as a tailor, was also in the household and they were living in Florence Terrace, Tolcarne.  That is just over the small river Combe from Street-An-Nowan, and is another area which housed many of my extended family over the decades of the 19th century. William had retired from fishing by then and lived on until 1893, when he was buried on 15 March in Paul.

Mary’s story didn’t end happily: in the 1890s she developed a mental illness and was moved to Bodmin Lunatic Asylum 50 miles away [which I believe is Cornwall Lunatic Asylum / St Lawrence’s Lunatic Asylum].  There she lived out the rest of her days until she died on 7 April 1906.  In the 1901 census she had been listed as a pauper patient and a lunatic.  I don’t know why she was listed as a pauper as at that time her drift fisherman husband William Batten was living with his mother in Street-An-Nowan, but all the evidence points to that being Mary Batten nee Jacka.

In 1909 her widower William remarried; his second wife was Catherine Treleven and they lived together in 1911 in Newlyn, with William still fishing.

William and Grace’s youngest child, tailor Richard, had died in spring 1908; their line was carried on through their son John Cotton Jaco.

5 thoughts on “William Jacka and Grace Cotton, play, school, secrets and the asylum”