This is Rosanna Peychott’s story; the second part of a 120-year story of Cornishwomen Elizabeth, Rosanna, Jane and Emma.

Emma was the bride of a distant cousin of mine, John Wright Rowe Jnr, and grew up on a small island in the Isles of Scilly, off the south west of Cornwall. When I had a look at her story I found that not only did her ancestors flit between Penzance and the isles of Scilly, but that she had exotic genes from her great-grandfather Bernardo Peyshott.

Rosanna, born in Penzance c 1822 and half Portuguese, lost her mother Elizabeth Peychott nee Hessell when she was only 14, and her father Bernardo Peyshott, a mariner, is likely to have been away at sea much of the time. In her teens she was working as a tailoress and living near the harbour in Penzance.

William was a pilot from Higher Town on little St Martin’s island in the Isles of Scilly, his father Matthias Nance was also a pilot, and in later life Matthias farmed 5 acres at the age of 71. William’s grandfather had also lived on St Martins, which in 1851 had 181 inhabitants.

He is likely to have met Rosanna when off island and they married in Madron Church (up above Penzance) on Thursday 2 September 1847.  Their first child, named Matthias for his grandfather, was born in May 1848 but up in St Peter’s parish, Liverpool, which made me quite glad their unusual combination of names had let me search a broad area easily.

They must have moved back to Cornwall soon after as sadly the death of their son is registered in the Penzance area early in 1849.

They went on to have two daughters: Jane (late 1849) and Roseanna (early 1854) both registered in Penzance.  In 1851 Rosanna Snr and Jane were living in Quay Street in what is now Penzance, but William wasn’t home that night.

It turns out that he was either in, or on his way to, Liverpool where on 31 March 1851 he was presented with his Master’s Certificate of Service, British Coasting and Foreign Trade; Seaman, Mate, Master, in the merchant service in which he’d been for 10 years.

By April 1861 William had moved the family back to St Martin’s and they were living in Higher Town near his father and widowed sister Jane.

On 17 October 1866 William sailed from Liverpool on the SS Olinda as an Able Seaman, a ship of 516 tonnage.  He is reported to be very good in both conduct and his ability in seamanship. The Liverpool and Pernambuco [Brasil] vis Lisbon [Portugal] line had a fleet of four ships which departed every 3 weeks, so presumably he was away about 11 weeks at a time. [Info from advert on FMP’s BNA collection.]

The family were still living in Higher Town in April 1871 and April 1881; the 1881 census indicates they were very near the public house [can’t see one there in the present day]. Rosanna was recorded as a tailoress for both censuses; William had retired as a mariner/boatman by April 1881.  On 8 January 1874 when his daughter Rosanna married his occupation had been recorded as a carpenter so perhaps the sea was too rough to go out at that time, or he was between jobs, and he was making money that way. 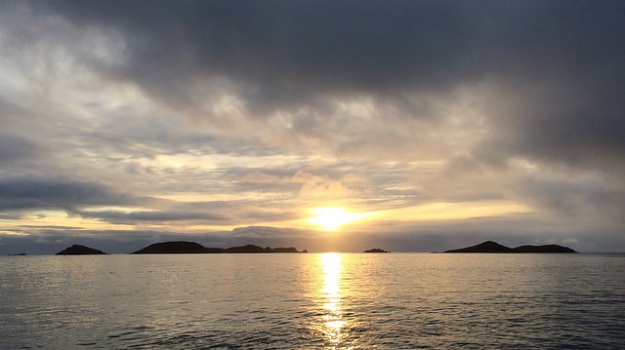 Rosanna and William’s older daughter is Jane Nance and I’ll tell her story next.