Albania was born on 19 May 1865 and baptised on 19 July in Trinity Wesleyan Methodist Chapel, Newlyn, Cornwall. She was the seventh child of fisherman Thomas Tonkin Tremethick and Patience Daniel Rowe, with 4 older brothers and 2 older sisters.

I have seen different listings of Albania over the years, notably Albina, but I understand her formal name was Albania, and she also had a couple of younger cousins called Albania. Goodness knows why her parents chose that name, a visiting fisherman friend, an Albanian sailor who saved someone’s life perhaps, one of those quirky unanswerable family history questions I suspect. Maybe she started using ‘Albina’ to avoid that question every time she met someone new.

By 1871 she was at school, as were Grace, Thomas, Ann and John.  Her two oldest brothers were working by then: Joe as a labourer and James as a message boy. By that time Albania had two more brothers, Samuel and William Rowe, so I’m sure the household would be keen for Joe’s and James’ contributions. Thomas and Patience’s final, tenth, child arrived in March 1872, a little girl named Patience for her mother.  By the time Albania was ten in 1875 her oldest brother Joe had moved away with Great Western Railway.

In February 1878, when  Albania was still only 12, her father Thomas died.

In September 1880 her oldest sister Grace married Royal Navy quartermaster James Richards, but in St Peter’s Church, Newlyn, rather than the Chapel.

By April 1881 Albania was also bringing in a wage, working as a grocer’s assistant in Newlyn.  By that time second-oldest brother James was working as a coachman in Devon. That summer her second-oldest sister Annie married a widowed lighthouse keeper called Thomas Crask.

Her brother Thomas joined the Navy and on May 1887 Albania was a witness to his marriage to Mary Badcock in St Mary’s Church in neighbouring Penzance.

Tragedy struck the family in April 1888 when her sister Annie Crask died; Annie was buried in Paul Cemetery on the hill above Newlyn. 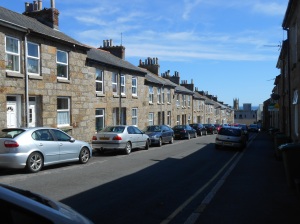 A few weeks later, James, who was by now living in Kingsbridge, Devon, married Kate, a tailor’s daughter.

In April 1891 Albania was 25 and living in St James Street in Penzance. A young Cambridgeshire-born fishmonger’s son called Seth Harold Lemmon was living in the next street along, Belgravia Street, with his widowed sister Mary Bett. Seth and Mary were both drapers’ assistants and by then Albania was working as a boot warehouse assistant.

In July 1893 her brother John married Sarah Williams up in Paul Church, Newlyn.  By that time Albania and Seth were likely to be  courting, as in early 1894 they married in the Penzance area.

It appears that they had twin boys in spring 1895 in Penzance area: Arthur Charles and Harold Tremethick Lemmon, although Arthur died at or just after birth.

By the census of 31 March 1901, Albania, Seth, by then a commercial traveller and local preacher, and Harold had moved to Plymouth, Devon.  Their third child, another son whom they called Arthur Tremethick Lemmon was born in early 1902, in the reign of the new King Edward VII.

Albania’s mother Patience and William Crask, Albania’s sister Annie’s widower, were visiting at that time.  Either they stayed as long-term house guests or found places of their own locally in Plymouth.

By 1911 15-year-old Harold had joined the Navy; he was working as a boy artificer, engineer, which Wiki tells me is someone skilled at working on engines and boilers.  On 19 Aug 1920 Harold married Irene Garland in Mutley Wesleyan Methodist Chapel, Plymouth.  Harold stayed in the Navy all his life, being listed in 1949 as a Naval Pensioner.

I think that Arthur may also have gone into the Navy.  I’ve found a passenger list on Ancestry for an Arthur T Lemmon, married to a Gertrude F, heading to Gibraltar from Liverpool on the Lancaster with their teenage daughter Elizabeth in 1950. This matches with info from the 1945 Navy List. Both sources refer to Chief Constructor and I understand this is part of the Constructor Corps. Maybe in a few years I’ll have access to the marriage record which would confirm this. Also someone’s family tree on Ancestry matches this with a 1928 marriage listed between Gertrude F Ball and Arthur Tremethick Lemmon.  So this is all tying up and looking very positive.

In 1923 Kelly’s Directory, private residents section, identifies Seth as living at 15 Coleridge Road in Plymouth; I have no reason to supposed Albania wasn’t there also.

Albania died in the first quarter of 1937, in Plymouth.

After a probate hearing of 13 June 1940 Seth received a second legacy from the Tremethick family: his sister-in-law Mary Tremethick (nee Badcock), widow of Albina’s brother Thomas.

On 8 May 1949 Seth checked into the Moorland Guest House in Wotter, Devon.  And then he disappeared.  His body was found later that month, on 25 May in Wotter Clay Pit, Shaugh Prior, Devon.  His date of death was noted as 8 May, and his probate was heard on 19 July that year. He left approx £4,107.89 in today’s money to his son Harold.

5 thoughts on “Albania Tremethick, the grocer’s assistant who married a Lemmon”