Michael Brown is my great-grandfather.  My Dad knew him, and was evacuated to his house during the war where he recollects Michael would listen intently to the war news on the radio, but Michael died long before my time.

He was the son of Joseph Brown and Alice nee Hedley and was born in 1876, the second of six brothers.  These were Hedley, James, William, Thomas and Albert and four of these six I know to have been in the army. All were born in Newcastle Upon Tyne, Northumberland, but at some point in the late 1880s the family moved to Leeds, West Yorkshire.

Michael was a sharp-shooter in the army cadets and we have a collection of newspaper reports such as this one about inter-Brigade shooting competitions. 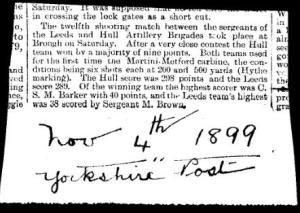 He became a reservist and served in the 69th (West Riding) Field Regiment, Royal Artillery.  I have a huge amount of information about Michael’s military career thanks to my dad who’s doing a fantastic job learning about the various horrific battles and near-death situations Michael survived.

Hopefully we’ll get it made up into a book, so I’ll not go into too much detail.

Information about Michael Brown’s award of the DCM

However I will just share this:  Michael was awarded the Distinguished Conduct Medal in 1918 “when the battery came into action direct from a very long and trying march, he displayed conspicuous gallantry and devotion to duty.”  Sadly the medals are no longer in our possession, they were sold at Christies as part of a package which included a photo of Michael marching at the head of his battery.  Maybe the photo will suddenly display on a WW1 website or magazine.

Michael’s other, civilian, life-long profession was that of postman.  By the age of 16 in 1891 he was working as a telegraph boy in Leeds and by 1901 was the town postman.

He married Sarah Emmaline Halliday in 1902. ‘Sallie’ had been born in Leeds but was descended from a Gateshead family. They had one child, William ‘Bill’ Halliday Brown, in 1905.

In 1911 the census records his occupation as “Town Postman Acting As Asst Inspector Of Telegraph Messengers”.  After the war they continued to live in Leeds and by 1931 when Bill married, Michael was the Inspector of Postmen.  In 1936, or just after, he and his fellow post office workers were awarded the King’s Silver Jubilee Medal.

Michael was clearly very loyal to his regiment as in April 1939 he obtained permission to open a recruiting office in Roundhay Road to recruit to the 69th (West Riding) Field Regiment R.A. (T.A.).

Michael died in London in 1951, a year after his wife Sallie; they had been staying with Bill and Phyllis who’d been taking care of them.