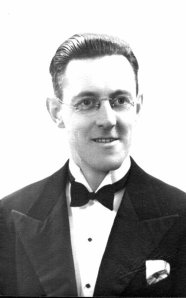 It’s my grandfather William ‘Bill’ Halliday Brown’s birthday this week, 12th April. He was born in 1905 in Leeds, the son of Michael Brown and Sarah Emmeline Halliday.  He lived about 10 miles from me when I grew up and we would go visit him and my granny Phyllis Brown nee Broadbent on Sundays.

They lived in a bungalow, with paintings by Granny on the walls, a coffee table she made in the living room, and in the garden a bank of black-current bushes covered in netting to keep off the birds.

What I associated with Grandad, however, were different: a garage full of drawers of wires, springs, wheels and cogs which would put Wallace to shame, a freshly-baked [by Grandad] sponge or Battenburg cake every time, and his piano. I remember he would occasionally do a little tap routine in the style of Fred Astaire, his hero, and I sort of vaguely knew he had been a pianist on cruise ships once, although I didn’t quite get that grandparents could have been young at all ever, so I pictured him doing it at his current age.

When I said to Dad that I wanted to feature Grandad this week he sent me through a mini-biography and I was intrigued to hear, now I’m old enough to appreciate it, how he had played piano on various cruise ships for four years until he married, finishing his time on the ships with a cruise with star passengers: The Prince of Wales (later King Edward VIII) and Prince George, [the Duke of Kent rather than the later King George VI who had been called Prince Albert].  In later years Grandad would work as a pianist in the evenings to supplement his income.

Wiki even mentions the cruise in the Prince’s entry:
“From January to April 1931 Prince George and his elder brother the Prince of Wales travelled 18,000 miles on a tour of South America, voyaging out on the ocean liner SS Oropesa and returning via Paris and an Imperial Airways flight from Paris–Le Bourget Airport that landed specially in Windsor Great Park.”

At the weekend I discovered that there is currently a really good month-long subscription offer at the British Newspaper Archive so decided to go for it. Having the name of that last ship, the Oropesa, I searched for that and discovered a host of jolly fun stories about the Princes and their 18,000 mile trade trip to the Caribbean and South America, their time on board and the enthusiastic receptions they received in Jamaica and Peru.  My favourite story didn’t actually mention Bill Brown by name, but I love this paragraph:

“Prince George, who is an accomplished pianist, has on several evenings during the voyage played accompaniments for songs by other passengers, giving much enjoyment to everyone.”  [Dundee Courier, 2 February 1931]

I can just picture Grandad doing his Fred Astaire flourish moving aside for the Prince to take his seat at the piano.  He kept a journal but didn’t go into detail, just pretty much the cruise start and finish dates – no royal insider gossip there.

I’ll try at some point to find out more about the Oropesa and the other ships he played on, and see if they have photos, but I get the impression that the cruise line no longer operates.  Maybe some royal photo archive would have photos from the ship’s lounge? I’ll also try some of the hotels that he worked in after returning to the UK to settle down in late 1931.

Follow-up:
A have found this rather stilted conversation between the Princes and the Captain:

And this one about their visit to the Argentine:

What I did find disconcerting about the archive papers in comparison with the modern papers is that stories could be in an almost random order at time, with the big names and items given the same column space as day-to-day stories.  For example, on 31 January 1931, under a story about the Princes’ trip, there was three column inches of “More Cotton Mills Close, 250,000 Operatives Now Out of Work” then the same amount of space for “More Rain – Weather Prospects This Week-end”. Back to the real world.

So I would really recommend trying the British Newspaper Archives offer, to look for a glimpse of what happened to shape your family’s lives, whether it be cruises with princes or life-changing events that affect thousands of people in the population.  Even if you don’t have such an unusual search term, it lets you choose a likely publication (for me the Yorkshire Post) by year, month and date and just browse…